How Much Are Airsoft Guns? (With 15 Examples) 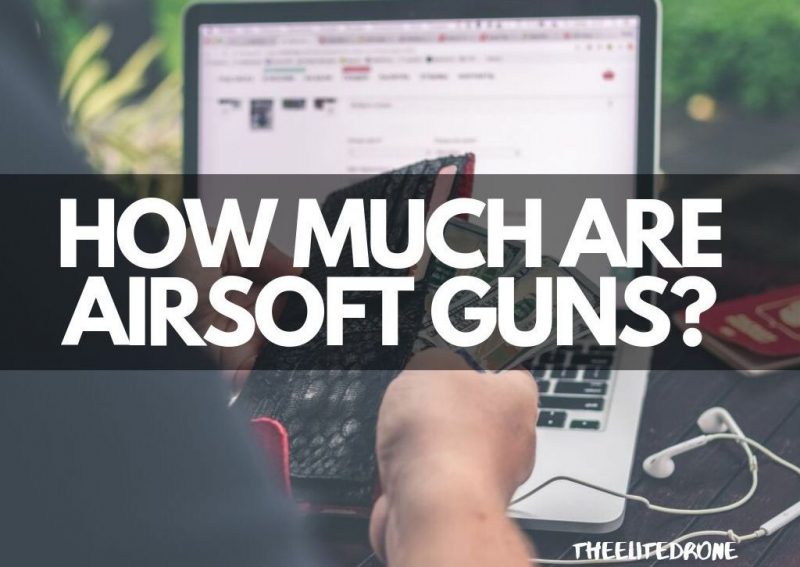 How Much Are Airsoft Guns? (With 15 Examples)

Airsoft guns can cost anywhere between $20 and $500 depending on the type, overall quality, and any modifications completed. Airsoft pistols typically sit at the lower end of the spectrum, with most models costing approximately $50 to $150. Airsoft snipers, on the other hand, can cost upwards of $500 based on the base rifle purchased and the upgrades you make to the rifle. The same goes for AEGs.

To help you better understand what to expect when buying an airsoft gun, we researched the prices of 15 popular airsoft guns of varying types, form factors, and brands. Note that we’re listing gun prices out of the box, without considering added upgrade costs. Those will vary from person to person.

Note: Prices are pulled from Airsoft Station and Evike. They may have changed slightly since the time of writing.

Why Are There Price Variations?

As you might’ve noticed, airsoft guns can dramatically differ in price. These prices fluctuate due to a number of factors. Below are some key drivers behind many price differences you’ll encounter on the market:

Brand Reputation – Even newcomers to airsoft may be aware of some brands that have become household names over time. Tokyo Marui, for example, has a rich history in the sport and has a penchant for producing quality guns. Acclaimed brands like these have cache and a following of loyalists. Accordingly, they recognize how popular they are, thus taking advantage of a captive market. Brands even excel in different areas, such as performance, build quality, or upgradeability. Some even nail it in all areas. These are the manufacturers that can charge more without making shoppers bat a collective eye.

Build Quality – A common challenge with airsoft gun shopping is finding great quality for the money. Build quality is often the quickest way we can assess how “solid” a gun is. This tends to be subjective, though some universal truths exist. Build quality is equated with durability. This durability is measured in two ways: externally and internally.

External quality partially encompasses how a gun feels in the hand. This depends on materials manufacturers construct a given gun from, most commonly metal or polymer. Polymer is a form of plastic, making it lighter than metal. It also comes in some variants. Many of these are thinner, thicker, homogenous, or blended with other materials. For example, high-end assault rifles may incorporate nylon or glass fiber within their polymer frames.

Polymer is cheaper on the whole and typically costs less. However, polymer guns aren’t automatically inferior to their metal counterparts. Metal guns are usually more durable and more expensive, since metal is occasionally trickier to form and costlier. Any moving parts including the trigger, switches, bolts, and buttons all contribute to a gun’s external build quality.

Internal quality relates to the guts of the gun, or the parts that really make the gun operate. These are typically not visible externally. Components like the bolt assembly, piston, gearbox, trigger contacts, and more make up a gun’s internals. Plastic internals are cheaper, less durable, and tend to warp faster. Tolerances are tighter internally than externally – while a manufacturer could make a gun’s frame from thick polymer, they may not be afforded the luxury to do so inside the gun. Cheaper budget manufacturers will often use plastic in place of metal for key components. Conversely, metal components are sturdier and lend themselves to greater longevity. The split between metal and plastic isn’t the only consideration, however. With many moving parts, some are required to collide while firing a round. Higher-quality guns will incorporate padding or cushioning to dampen repeated impacts or mitigate degradation.

Performance – Though not an independent factor, better guns tend to perform at a higher level than cheaper counterparts. This can include variations in accuracy, FPS (velocity), and rate of fire. The true consideration lies with how these performance gains are realized. Better guns are often built more stoutly internally through improved gearboxes, stronger springs, and hop-up variations. These factory upgrades contribute to improved performance. For that reason, performance often has a direct relationship with internal build quality.

Firing Mechanism – Also related to internal quality is firing mechanism. There are three main types of airsoft guns: spring guns, gas guns, and electric guns. These all rely upon different internal components to operate. Spring guns rely most heavily on a simple cocking mechanism, which loads the spring. Gas guns use pressurized gas to propel rounds and cycle them. These guns require sturdier internals due to the high pressure exerted by compressed gasses. Electric guns, or AEGs, rely on capable gearboxes and durable trigger contacts. Expensive guns include built-in measures to combat electrical wear, and even feature computerized systems. As guns become more complex, so do their components. This adds expense if corners aren’t cut.

Research and Development – We often equate R&D to the tech or automotive spaces, yet airsoft guns are also complex machines. Consistently making newer models better from one generation to the next requires testing. That experimentation with performance, components, materials, and more costs money. Airsoft brands don’t want to just eat these costs – therefore, they may charge more for their guns, especially from year to year. Many guns even have proprietary components. While airsoft manufacturers like to borrow technology, developing new technologies of their own comes at a premium.

Trademarks and Licensing – Airsoft guns originally gained popularity because they emulate the real thing. That’s still true today, perhaps even more so. As such, airsoft manufacturers and distributors collaborate with renowned firearm makers to produce accurate designs. These replicas feature 1:1 scaling and are built to spec internally and externally. Of course, these real gun manufacturers like Colt, CZ, and Heckler & Koch own many patents based on their original designs. Airsoft brands that want to create the most-accurate guns have to obtaining licensing. This allows them to use trademarks, design elements, and branding. This realism costs money and is often passed down to the consumer.

Novelty – While airsoft is already a game of unique tastes, some guns truly stand out from the pack. In a space where manufacturers are trying to differentiate themselves, some brands launch models that simply cannot be found elsewhere. These guns are often rare replicas or innovative spins on traditional platforms. Take for example the Matrix MP007 MP40 we linked above. This is something not widely offered by other gun makers, and holds historical importance as a WWII weapon. Airsoft guns like this are unique, harder to mass produce, and often a little costlier.

At the end of the day, there are a variety of factors you need to consider when trying to figure out how much your airsoft gun will cost. The airsoft guns in this list are a good way to predict how much you’ll need to spend