Airsoft vs Paintball: Which One is Better?

Airsoft vs. Paintball: What’s the Difference? 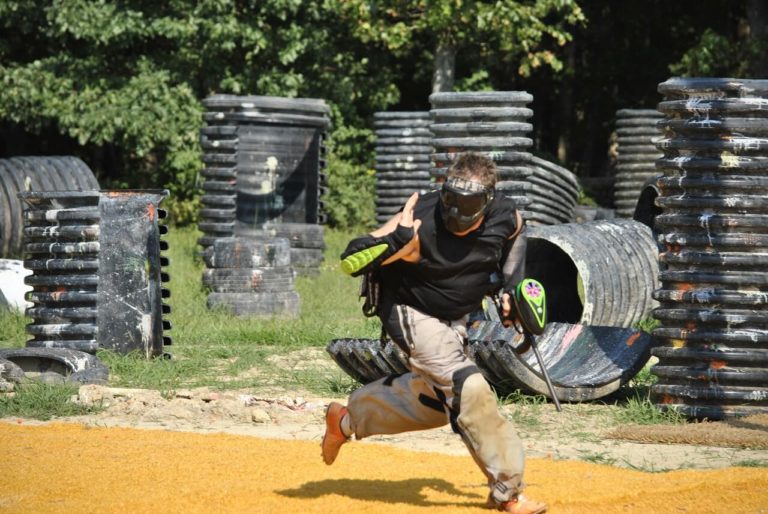 Not sure whether to play airsoft or paintball?

Almost every beginner has pondered this same question at one point or another.For this reason, I’ve went ahead and compared all of the main differences and similarities between paintball and airsoft in order to help you choose which sport to play.

In short, consider playing airsoft if you enjoy military simulation (MilSim) and want as much realism as possible. Keep in mind that you may have to spend more money than you would in paintball to be able to enjoy the game properly. If you don’t care much for MilSim and want to save some money, paintball might be a better choice.

Airsoft is a recreational team sport where players shoot at other players with plastic BB’s – also known as pellets. These plastic pellets are fired out of an airsoft gun through the use of springs, batteries, HPA (High Pressure Air) or some form of compressed gas.

Airsoft guns also come in many shapes and sizes and are often designed to resemble and function like actual firearms. You can shoot anything from a pistol, to a sniper rifle, to an automatic sub-machine gun – the options are endless.

In fact, the realistic look and feel of airsoft guns and equipment is the main reason many players are attracted to the sport. While it may be dangerous to be an actual soldier in a real war, there is no real danger to playing airsoft other than a small welt or bruised knuckle.

The main disadvantage of playing airsoft is that it’s easy for players to cheat. This is because there’s no definite way to prove that you’ve eliminated your opponent. Players instead have to rely on the honesty of other players and adhere to the honor system.

Paintball is another team sport where players shoot at other players. But instead of being played with plastic BB’s, paintball is played with small gelatin capsules filled with water soluble dye that looks like paint. This is why the sport is called “paintball”.

Originally paintballs were used by farmers and foresters to mark trees and cattle at a distance. For this reason, you’ll typically hear people refer to paintball guns as markers.

A marker utilizes a loader (also known as a hopper) to load paintballs into the breech of the gun. Then after you pull the trigger the paintball gun uses a propellant such as CO2 or compressed air to propel the paintballs out of the barrel.

Instead of using the honor system like airsoft, a paintball has to come in contact with a player and break upon impact in order to eliminate them from the game.

While both airsoft and paintball are similar sports that require you to eliminate your opponents with small sphere shaped projectiles, that’s about the extent of the similarities.

The main difference between paintball and airsoft is the equipment used to play.

There’s also the difference of appearance and the difference of propellants used to fire the weapon. Airsoft guns can be powered by batteries, springs, CO2, HPA, propane or Green, Red or Black Gas (propane-silicone oil mixture). Whereas paintball guns can only operate on CO2 or HPA.

One of the main reasons that people to play choose airsoft over paintball is because it’s easier to get a group of players together to play. This is because most players own at least one airsoft gun that is powered by either battery or spring.

Another big difference between paintball and airsoft is the difference of face protection.

The main advantage of wearing metal mesh over safety goggles is you no longer have to worry about your lens fogging up or glaring in the sun. Just make sure to choose a mask with perforated steel and not woven wire as it’s a much stronger material.

The disadvantage of wearing metal mesh is that it won’t protect your eyes as well as a mask with a safety lens would. Not saying that metal mesh isn’t safe, but there’s always a chance that it could possibly break after being shot at close range at a high FPS.

Another main difference between paintball and airsoft masks is the difference of size. Paintball masks are designed to be more durable and are typically bulkier because of it. Whereas airsoft masks don’t have to be quite as indestructible so they can be slimmer in size and fit closer to the face.

And while not every airsoft field requires full-face protection, I personally wouldn’t recommend leaving your face completely exposed. Trust me, getting hit in the chin with a hard plastic BB at 400+ FPS is not fun at all.

One of the coolest features about airsoft guns is the way that the ammunition is stored in a magazine. While a paintball loader is big and bulky and ruins the field of view over the top of your marker, airsoft magazines are stored under the gun and have a cool realistic look and feel that many players love.

If you’re on a budget and trying to save money, then airsoft is definitely the better option in the long run.

The main reason that paintball is more expensive than airsoft is because the ammunition used to play is far more expensive. While a box of 2000 paintballs typically costs around $40 to $60 at a paintball field, the same amount of airsoft pellets can be bought for around $7 to $10 on Amazon.com.

Which is More Painful?

Which sport is more painful? Airsoft or paintball?

This is one of the most common questions asked by those looking to play for the first time, but unfortunately it’s not an easy one to answer.

However, some airsoft fields allow players to wield an ASW such as a sniper rifle that can shoot at over 500+ FPS. When compared to paintball fields that don’t allow you to shoot over 280 to 300 FPS, this is a big difference.

Of course, most airsoft fields typically have rules against shooting players up close at such a high FPS, but as you probably know rules don’t always tend to be followed. Especially in the heat of a moment.

Another big difference between plastic BB’s and paintballs is the difference in the bruise or welt left behind. While getting shot by a paintball may leave behind a bruise a little larger than a quarter, getting shot by an airsoft BB will only result in a small red welt barely bigger than an ant bite.

Although if you get shot close range by an airsoft gun set at a high velocity then the pellet could possibly penetrate the skin if you’re not lucky. You also don’t want to get shot in the hand, ribs or basically anywhere on your body that has little to no fat or muscle to soften the blow.

Which is More Popular?

No matter where you live, paintball is more than likely going to be more popular than airsoft.

On the other hand, a player wielding a high-end airsoft gun is going to absolutely destroy a beginner with a cheap airsoft gun. The RoF (Rate of Fire) and accuracy of a high-end AEG (Automatic Electric Gun) is simply too much of an advantage over a plastic piece of junk made in China.

At least the beginner with a rental paintball gun has a chance.

Still haven’t decided whether you want to play airsoft or paintball?

Hopefully this list of pros and cons will help you decide.

Now that you know all of the pros and cons, the difference in price and equipment and which sport is more painful and popular, you should be more than prepared to make the decision between paintball vs. airsoft.