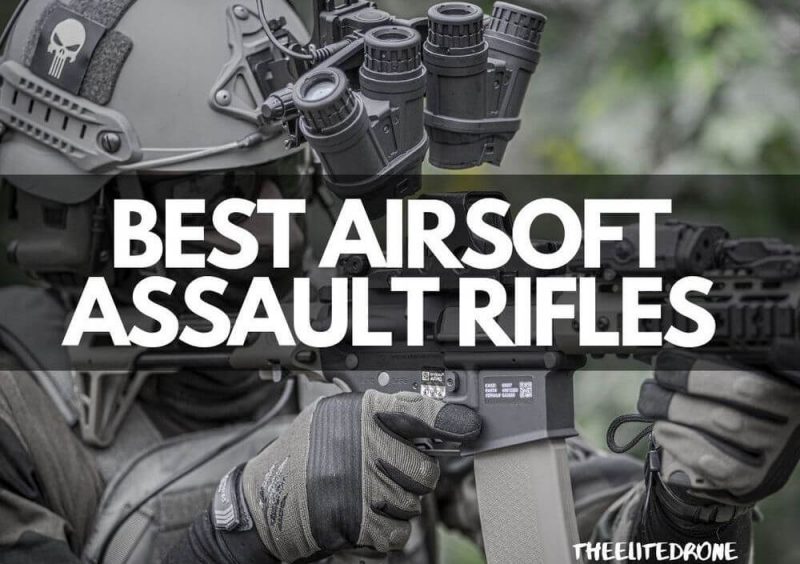 Every airsoft gun has its own role on the field, and the assault rifle is no different.

Assault rifles are unique because they have:

All these benefits are what makes assault rifles one of the most used airsoft guns in any match.

That being said, there are some unique types of airsoft assault rifles you can choose from.

Some of the types are:

Our picks of the Best Airsoft Assault Rifles (Updated List)

Although I’ll go into more detail on each airsoft assault rifle, I included a list of  all the ones I mention to make it easier to find. So here they are:

First on our list is the beloved bullpup, which has been around for over 100 years. The bullpup rifle’s design turns heads due to its odd appearance. While magazines and firing mechanisms are traditionally located before the trigger guard, these are behind the trigger in a bullpup design. This makes this class of guns remarkably portable and compact, though the inner barrel remains the same length.

These are perfect choices for CQB and medium-range fighting. They retain the accuracy of larger weapons in a lighter form factor. Since more weight is concentrated towards the stock, bullpup rifles are easy to point and shoot. This helps reduce fatigue, keeping you in the fight longer.

Many players prefer the look of the bullpup design. Those who don’t still praise these guns for their incredible flexibility, something which elevates bullpup designs above others. However, owners may sacrifice some user friendliness when reloading or accessing controls near the gun’s rear.

Some great choices for airsoft bullpups include the ICS L85A2 and the PTS MagPul PDR-C.

ICS did a great job of modeling the L85A2 after the SA80 assault rifle. It feels and works great out of the box, and at 8lbs, it weighs about the same as an empty SA80(No cartridge/attachments).

The L85A2 comes with a manual, which is available online, and a magazine. This AEG rifle uses M4/M16 Series magazines, although some magazines don’t work as well as others. From my experience, mid-cap magazines feed the best.

Internals can be easily upgraded (although it can be pricey), and adjusting the hop-up is super simple.

Just like the actual SA80, the L85A2 isn’t really ambidextrous since the ejection port would be right next to your face if you’re left-handed. 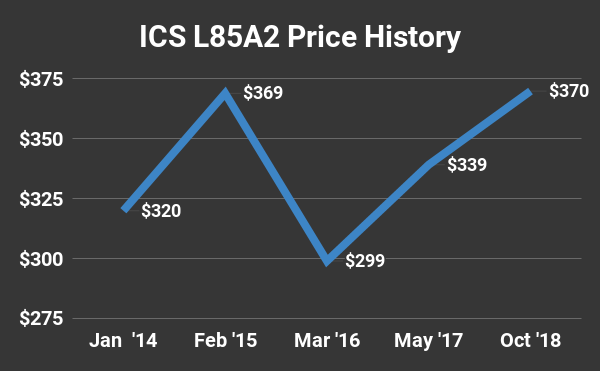 In terms of price, you can see in the graph above that the price of the L85A2 has fluctuated over the years. If you’re looking to save money, make sure you buy it when it’s less than $370.

The PDR-C is an AEG airsoft assault rifle modeled after the Magpul PDR, which came out in 2006.

At only 3 pounds, the PDR-C is a lighter and more compact airsoft assault rifle than the L85A2.

The PDR-C is best used for CQB, capable of reaching 350 FPS with .20g BBs. With some upgrades though, you could effectively use this on the airsoft field as well.

Speaking of upgrades, the stock motor that comes with this rifle isn’t very good, so upgrade that as soon as you can. 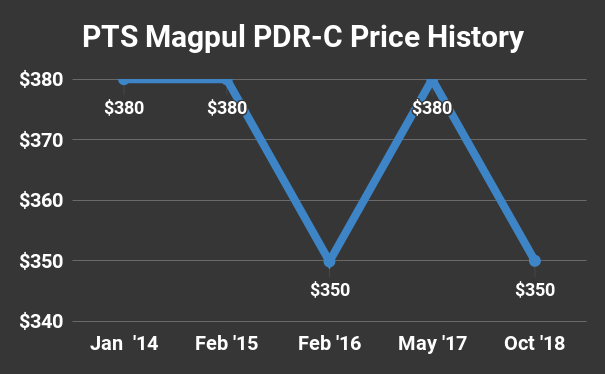 The price of the PDR-C is declining, so now is a great time to buy.

$350 is a solid price for this airsoft assault rifle, and you’ll have an extra $30 to use towards any accessories you might want to get.

The PDR-C is the perfect choice if you’re looking for a rifle that’s ambidextrous, light, and ergonomic.

Designed by Heckler & Koch as a versatile new class of assault rifle in the 1990s, the G36 is both lightweight and accurate. According to H&K, the motivation behind creating the G36 was clear:

“…it was suited for dismounted infantry operations. For optimal handling, weight, and rate of fire in close-quarters battle, and for rapid, accurate and penetrating single fire in long-range combat.”

With a unique-and-modern appearance, the gun truly stands out from its predecessors. These weapons almost resemble submachine guns due to their compact appearance. For this reason, the G36 bridges the gap between traditional assault-rifle designs and shorter bullpup models. Many players will love how they stand out and perform in a variety of conditions. The design is also quite customizable.

A couple of airsoft G36s that will provide the best experience possible are the Umarex H&K G36C and the ICS G33.

If you’re looking for the best airsoft G36, then start with the creators themselves.

The G36C is a light and accurate airsoft gun that’s under $200. When you buy this AEG rifle, you’ll also get a mag, battery, and charger.

What I love most about the G36 is how forgiving it is. This gun is pretty durable, and upgrading the internals are easy.

One issue I have is that the charging handle is easy to break if you use it alot, so be mindful of that. 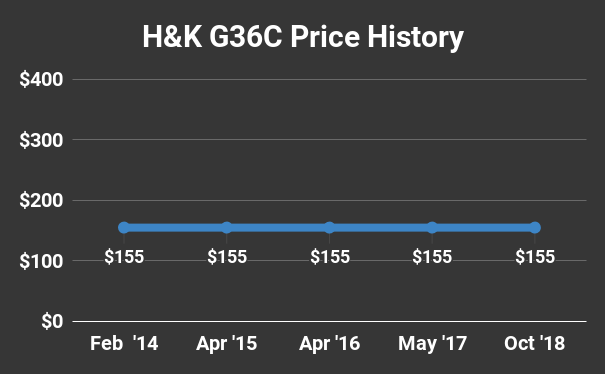 The price has only dropped a few cents since the G36C first came out, so don’t expect anything to change anytime soon.

If you need an airsoft gun for CQB and are tight on cash, this airsoft assault rifle is one of the best choices out there.

I know, I know. Although the ICS G33 looks very similar to the G36, it’s not actually a G36. That being said, this airsoft rifle is still worth mentioning.

The G33 comes with the standard gear (mag, manual, no battery included), and all for under $300.

What’s cool about this rifle is that there are a bunch of rails on the G33 for any accessories you may want to attach. On top of that, it looks great right out of the box.

Although it’s made from polymer, the airsoft gun is a bit heavy, weighing about 5.6 lbs.

Overall, the G33 is another airsoft assault rifle that’s cheap, solid right out of the box, and perfect for CQB. 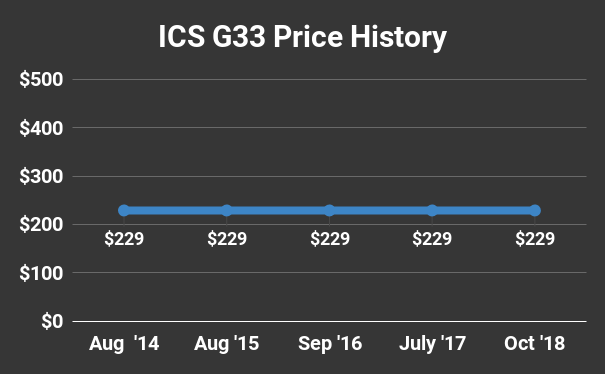 Just like the G36C, the price of the G33 has been consistent throughout the last 4 years.

Tracing its roots back to 1960s Israel, the Galil is a modern take on the AK-47 design. Bringing key improvements to the table, based on the Valmet Rk 62 platform, the Galil has an attractive design firmly rooted in Eurasian military history. It was designed by Yisrael Galil, to whom the gun owes its name.

The Galil commonly has a folding stock and adaptable externals. They are easy to wield and best used in short to medium distances. The compact form factor is CQB friendly, though the extended stock offers optimal support for a variety of situations. Galils aren’t quite considered bullpups, however, falling into their own unique category.

When talking about Airsoft Galils, the CYMA SAR Galil and the ICS Galil both come to mind. These are two of the best airsoft assault rifles available on the market today.

The CYMA SAR Galil is an airsoft gun modeled after the IMI (Israel Military Industries) Galil.

The rifle has a realistic weight to it, weighing roughly 8lbs.

One of the best features of the SAR is the side-folding stock, which gives the user a lot more mobility.

There are also two iron sights on the SAR, which is pretty interesting.

Aside from your standard iron sight for long range, there’s a 3 dot white sight. You can flip them up and down depending on which one you want to use. 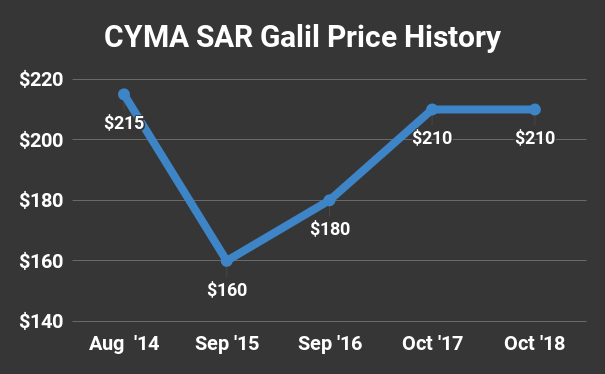 The ICS Galil is another great airsoft assault rifle for those interested in a non-M4 AR.

Just like the SAR, this airsoft assault rifle has flip up night sights and a side-folding stock.

It is a bit pricier than the SAR, but it’s partly due to the full steel construction of the rifle. That means it’s much more durable and feels more realistic.

It’s surprisingly lighter than I thought a metal airsoft gun would be, weighing only 7.7 lbs.

Overall, this airsoft gun is very realistic and accurate right out of the box with solid internals. 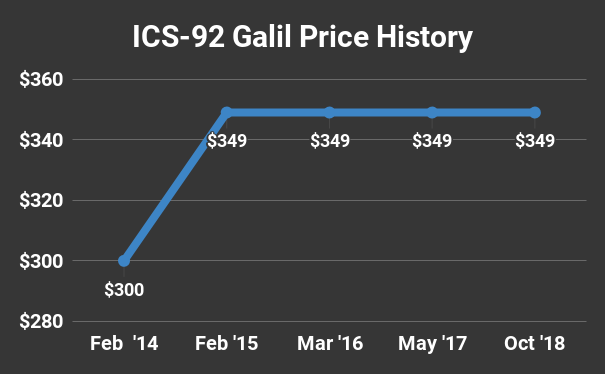 A consistent $349 price means anytime is the best time to buy this airsoft gun.

When it comes to making rifles, some brands do it better than others.

Knowing which airsoft brands you can buy from will determine whether or not the airsoft assault rifle you buy is high-quality.

Here are some airsoft brands you can’t go wrong with:

ICS – ICS has been around for over 30 years, and for good reason. Aside from the AK-47, ICS makes some of the best airsoft assault rifles out there.

Real Sword – Real Sword’s 97 Series is outstanding, and the only reason I didn’t include it in this article was because it’s difficult to buy. Every time I’ve looked, it has been out of stock.

G&G – G&G airsoft rifles are usually good value for the price, and they have a variety of models to choose from.

Tokyo Marui Tokyo Marui has won all kinds of awards for their airsoft guns, which says a lot about their quality. They can be pretty expensive though.

CYMA – This is another one of those companies that have a wide selection of inexpensive airsoft guns.

So what do you think?

Did you agree with our best airsoft assault rifle list?

Or maybe you have a question.