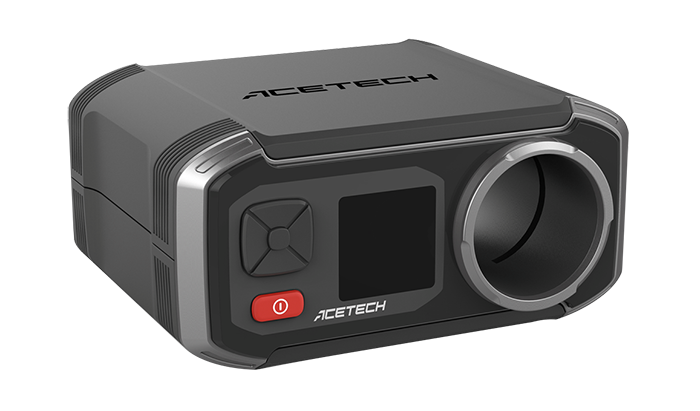 You can easily measure how far an airsoft pellet flies.

Simply keep shooting at a target which you are gradually backing away from, or figure it out mathematically.

However, it’s very hard to figure out how fast that same pellet flies. After all, it isn’t like you have a specialized instrument that will check that information for you, right?

Wrong. There is such a tool. It is called a chronograph, and it measures the velocity of your pellets with extreme accuracy, thereby giving you a measurement of the true power of your gun.

In this article, we will discuss what, exactly, a chronograph is, whether you need one and how to use one.

After that, we will review some of the best chronographs on the market, giving you all the info you will need to chrono your own airsoft weapon.

What is an Airsoft Chronograph?

What a chronograph is is pretty self-explanatory, if you look at the word parts that make up the word.

The root of the word comes from the Greek Chronos or time. The suffix is the Greek word graph, or writing.

The first chronographs used a small pin attached to the index that would put a mark, the length of which would  represent the length of elapsed time.

There are several types of chronographs, but the kind we’re discussing today measures the speed of a projectile.

It doesn’t matter what sort of projectile, either.

It could be arrows, airsoft pellets, rocks fired from a slingshot, or even bullets if you were so inclined.

The key is that the projectile has to pass through the chronograph’s sensors for its speed to be calculated.

What Can a Chronograph Measure?

A chronograph is useful for more than just measuring speed. In fact, they can measure a good variety of statistics that someone in the airsoft hobby would want to know such as the following.

Most chronographs will lose all the data listed above when you turn them off. This means you don’t have to fool with clearing the memory before each use.

However, if you need memory for whatever reason, there are chronographs out on the market that will remember a string of up to sixty shots even when turned off.

Chronographs are generally powered by a 9Volt, alkaline battery.

It is important to use an alkaline battery, because the sensitive electronics inside the chronograph need the controlled power output from this type of battery.

Why Get a Chronograph for Your Airsoft Gun?

There are several good reasons to get a chronograph. It is possible that you need one more than you realize.

Performance of your airsoft guns is important.

However, if your gun is losing performance, it’s sometimes difficult to tell.

If you know how fast your gun shoots a certain type of pellet, you can judge the loss of performance much sooner, and then work to rectify the problem.

After that, you can retest to see if the performance is back to what it should be.

Some advertisers like to brag about how good their guns are, how they can shoot at higher FPS ranges than their competitors.

There is actually some truth to some of the claims. However, there are many more false claims out there. Some manufacturers inflate their gun’s actual firing power.

If you have a good chronograph, you can bust those claims and know the truth about the speed of pellets fired by the gun you intend on buying.

If you are one of the airsoft players who uses pre-charged air rifles, you will find that a chronograph is incredibly useful as it allows you to check the maximum pressure that your gun performs best at.

Start out by filling your gun to a pressure of 3,000 PSI. Then start firing until your gun is performing at its best.

If you refill at that point, you will notice at what pressure the tank accepts the fill. That fill is your maximum fill. Anything beyond that just is a waste of air.

Along with discovering your maximum top pressure, you can also use a chronograph to calibrate the gauges on all your refill devices.

Instead of just blindly filling your gun to 3,000 PSI, you can discover the proper the pressure reading at which each of your guns has its greatest power.

It doesn’t even matter if the gauges are off a little. You’ll always know what they should say for each gun.

A chronograph can be used to tell you whether your gun shoots faster or slower with the maximum number of pump strokes.

The last thing you need is to do more work than is necessary.

If your gun stops at 550 FPS on eight pumps or if you get 614 FPS with seven pumps but 567 with eight pumps then you know your gun needs repairs.

Chances are, you’ve read about airsoft experimentation and wanted to do it.

Perhaps you wanted to learn if .22 pellets really develop 20% greater power than .177 pellets in your air gun, for example.

With a chronograph, you can easily answer that question.

Sure, chronographs are useful. But are they easy to use? Absolutely. Today’s chronographs come with complete sets of instructions.

Every time you shoot through the skyscreens, the display number changes to reflect the speed of that shot. The velocity can even be displayed in meters per second if you like.

Since the chronograph records time, you need something to start and stop the clock. That’s where skyscreens come in.

There are two skyscreens, so named because they point toward the sky, inside the chronograph box.

When you shoot a pellet, the start skyscreen detects the slight decrease in light and starts the clock. The clock is a crystal oscillator that vibrates at a uniform rate.

When the pellet passes across the second skyscreen, the clock stops. The velocity is calculated by the onboard computer.

Testing FPS without a Chronograph

Though a chronograph is the best way to test velocity, as well as other measurements, they can be kind of pricey. However, there are other ways to test the velocity of an airsoft shot.

Go To Your Local Field or Shop

Many fields and shops have ways to test your FPS, including chronographs you can borrow.

Though some of them may charge a price for the service, it isn’t going to be as much as the cost of a chronograph of your own.

If you don’t have a store or field nearby, it’s time to dig out the soda cans and shoot them.

As you can see, this method is very rough. It isn’t exact in any way shape or form. That is why getting a chronograph is really the best solution.

Now that you know everything there possibly is to know about chronographs, it is time for us to review the best ones on the market.

This chronograph, instead of utilizing a 9V battery is powered by three AAA batteries, making it much lighter than a standard chronograph.

To save that precious battery power, it also comes with a power shut-off, battery low auto shut-off.

Further, if you don’t want to use batteries, it is able to accept mini USB, and 5V/0.1A power adapters. There is no recharge function.

This chronograph also has a straight-forward menu, along with the ability to save five different pellet weights in memory and change them depending on what weight of pellet you are using.

The new MKX3200 chronograph from Xcortech is a huge step up from their older models. This one features a micro-USB port (for power input only).

If you choose to use batteries, it will take two AA batteries, just like one of your kid’s toys. However, this is no toy.

Compared to the earlier model of this device, this one is much more reliable and useable. Beyond that, where the older model had eight sensors, this one has fourteen.

This chronograph is also works with more than just pellets. It can do paintballs as well.

This also calculates many other things than just muzzle velocity. It will also do shot averages and pretty much any calculation you need.

Each Ballistic precision chronograph from Caldwell is calibrated to +/-0.25% accuracy and they are perfect for measuring the velocity of projectiles of all kinds, including bullets, pellets and arrows.

If you plan on operating this device in full sun, it comes with extra wide sun shades. You’ll never have to worry about an inaccurate reading due to sun interference again.

With this Blackwell ballistic chronograph, you don’t even have to worry about how you’re going to store your data.

Your chronograph can actually interface with your smart phone. They even include the fifteen-feet-long audio cable to make it happen.

The app displays velocity, stores data, and keeps notes about things like weather condition. All of this data can also be exported via SMS or email, if you want to look over it.

This is also the most portable chronograph we’re reviewing. You can pack it in its included carry bag and take it everywhere you go.

Chronographs are pricey, but if you plan on modding your airsoft rifle or just really like knowing what your velocity is, they are a good investment.

There are many reasons to choose one, including the fact that they can measure much more than just velocity, and can actually help you learn when your gun needs repairs.

Another advantage to chronograph use is that a chronograph can tell you what the maximum top pressure for your gun is, allowing you to get more use out of a tank of air.

You can even calibrate your gauges.

If you choose to purchase a chronograph, it is necessary to make sure you use alkaline batteries in it. Chronographs are full of very sensitive electronics.

These electronics need the sustained power that alkaline batteries can provide and using anything else could damage it.

The newer generation of chronographs even can connect to your smart phone and can export the data via SMS or email.

If you can’t afford a chronograph, there are ways to test your FPS without one. The best way of these is to borrow a chronograph from a buddy or from a field or shop near you.

Some shops will even let you use a chrono for free, but even if there’s a price, it’s still not as high as buying a chrono for yourself.

If there’s not a field or airsoft community in your location, you can test basic speed with a soda can.

However, that tends to be a really rough estimate, and not something that’s entirely useful.

No matter which way you choose to measure your airsoft speed, it can be a huge help to know exactly how fast those little pellets fire.