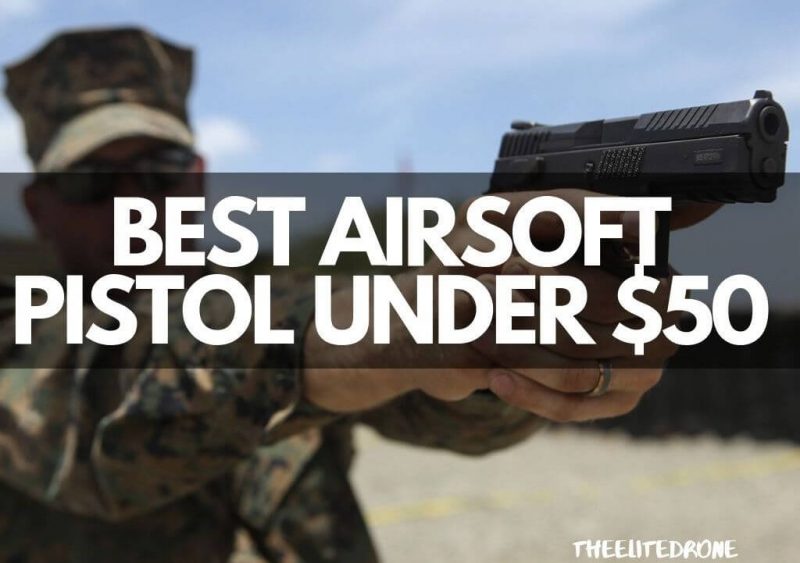 The Umarex P30 comes in an attractive package given its price point. The authentic H&K replica features a sturdy, metal slide atop an ergonomic, polymer body. This slide is hardy yet lightweight, making the spring mechanism easy to cock back repeatedly. At 7.42 inches long, the P30 has a full-sized yet comfortable form factor. Players accustomed to traditional 9mm designs will feel right at home with this pistol.

Additionally, Umarex has taken steps to make the P30 more durable than its cost indicates. An extended-life trigger mechanism ensures owners won’t be reaching for a replacement any time soon. The P30 also has a fixed bottom rail which will accommodate flashlights, lasers, or other attachments. Included in the box are the H&K P30, a 15-round magazine, and 400 BBs for your shooting needs.

The P30 has two main strengths that outshine all others: power and accuracy. The pistol claims an impressive muzzle velocity of 240-280 FPS, solid for an entry-level spring pistol. Though players can use lighter BBs, we recommend .20g BBs for optimal shooting. Players report the built-in hop-up causes lighter rounds to sail too high.

With the correct ammunition, players can accurately hit targets up to 30 yards away. This makes the P30 a reliable sidearm from range, easily keeping enemies at bay. Should the magazine be emptied, the slide remains locked and primed for a replacement.

The Umarex P30 is best suited for beginner players that require good performance. It’s a surprisingly-effective sidearm with great power and accuracy. However, players shouldn’t seek to upgrade this pistol. What you see is what you get with the P30, due to a lack of interchangeable internals. This isn’t a drawback, just something buyers should keep in mind.

Next up on our list is another H&K replica, the Umarex ASP, constructed entirely of polymer. The gun is sturdy and has a respectable heft, yet doesn’t feel sluggish in the hand. Much of that weight comes from the internals, which is made of metal. Luckily, this aids in durability, a necessity of the gas firing mechanism. This is not a gun that needs to be babied, though proper care will help it last.

The USP comes in two finishes, Black or Dark Earth, though the latter is more expensive. Like its P30 cousin, the pistol also features a built-in hop up. The pistol is 7.5 inches long and features a double trigger. The box includes the USP pistol and a 16-round magazine. This magazine is polymer, though metal replacements are available.

Being a CO2 pistol, the Umarex USP slings rounds at 350-380 FPS. Players will want to consider using BBs heavier than .20g for optimal range and accuracy. Speaking of which, accuracy is this gun’s double-edged sword. At distances around 60 feet, this pistol has little trouble hitting human-sized targets. However, extending that range presents problems somewhat quickly. While the USP has a hop-up system, this hop up is fixed. This leaves players at the mercy of their playing conditions, hampering adjustments in the field. Unfortunately, this adversely affects range in many instances.

Thankfully, the pistol is an excellent CQB option for players requiring a reliable secondary weapon. Players do seem to be conflicted over the trigger pull, however. It can be quite long, which hampers the USP’s fire rate to a degree. This isn’t a deal breaker, though, and is a subjective matter. Because the gun is CO2 powered, it is very efficient. One cartridge propels at least a few magazines of rounds, which keeps players in the fight longer. Keep an eye out for leaking magazines, as that can sometimes be an issue.

The Umarex USP is a great starter pistol, with issues that players can largely overlook due to pricing. Though it can suffer from some accuracy challenges, the pistol has nice power and build quality. While it does lack a blowback action, each shot provides nice feedback. This is a worthy sidearm for anyone who shoots from close-to-medium ranges.

The KJW MK-I is a 1:1, true-to-scale replica of the Mark-I competition pistol, with a polymer build. The pistol immediately stands out with its streamlined frame and pronounced barrel. This pistol uses either green gas or propane and looks like a precision sidearm. The MK-I feels solid but lightweight, weighing in at 1.6 pounds. While quite portable, it’s somewhat lengthy at 10 inches. Due to its form factor, fitting the pistol into a holster can be somewhat challenging.

The overall build quality is quite good and should stand the test of time. The pistol does accept some upgrades, something fairly uncommon at its price point. While most budget pistols are only available in stock configurations, the MK-I is flexible. This helps separate it from the pack. The pistol has no rails, however, and thus does not accept bottom-mounted accessories without modifications. The package includes the MK-I pistol and a 17-round magazine.

Measured with green gas, the MK-I shoots an impressive 350-450 FPS out of the box. Though that velocity is calculated using .20g BBs, KJW recommends players use .23g rounds or heavier. The pistol is equipped with an adjustable, metal hop up. This can be tricky to calibrate in the field, so players should make changes before matches. KJW states the range to be approximately 100 feet or more, a respectable number for a budget pistol. With the right ammo and minor upgrades, players can extend this range pretty quickly.

Owners report that the trigger pull can be both long and heavy. In some situations, that can make firing off successive rounds more challenging. The MK-I is quite gas efficient despite its power, resulting in fewer reloads. The metal internals are durable and handle the rigors of high-velocity shooting well. Players should be mindful of their playing environment. In some cases, the MK-I may shoot too hotly for certain fields. This may disqualify it from use or necessitate a spring downgrade to meet regulations. Similarly, players can find better options for close-quarters engagements.

The Softair M&P40 is an attractive, polymer pistol that comes in two finishes: Dark Earth and Tan/Black. The slide is also polymer. It has an easily-accessible thumb safety and ergonomic design. A textured grip provides great control over the gun and makes it comfortable to hold. The pistol is 8.6 inches long and features front-and-rear white dot sights. A bottom rail makes it easy for players to attach additional accessories. Durability seems to be favorable, as the M&P40 can take some abuse without malfunctioning.

The M&P40 comes with a hop up. In the box is the Softair M&P40 and a 15-round magazine. This is a drop magazine meaning it’ll eject freely from the chamber when released. This makes reloads faster by not requiring players to extract the magazine manually. However, this makes it easier to lose mags in the heat of battle. Players should be mindful of this double-edged sword.

Propelling BBs at 300-330 FPS, the M&P40 has respectable power. It’s certainly not the fastest weapon one can buy, but the muzzle velocity is perfectly serviceable. There is no blowback action, but this keeps gas use more efficient. Players can shoot multiple magazines before popping in another CO2 cartridge. This is advantageous during long games and exchanges.

While the M&P40 has a hop-up system, it is fixed. This lack of adjustment does keep players locked in, which cuts down on versatility. However, using .20g ammo and above can help alleviate accuracy concerns. Players do report good accuracy overall from closer ranges, which is where this pistol shines. The trigger pull may seem heavy at first, but this gets better over time.

The Softair M&P40 is a solid entry-level weapon for players seeking good power. The gun is built with durability in mind, inside and out, and provides great value for the money. The unique color scheme stands out from other pistols. Overall, the pistol will be a reliable sidearm without demanding too much from its owner.

In defiance of its cheap price tag, Win Gun’s M9 delivers superb value in an attractive package. It’s constructed from durable polymer, and includes a 20mm Weaver bottom rail for accessories. The M9 has no gas blowback action and is only compatible with CO2 cartridges. A serrated slide and nicely textured grip are comfortable and provide confident handling. Within the handle is the CO2 chamber, which is easy to access during battle. The gun has a very hefty feel and seems solid. This pistol will take abuse again and again while firing reliably.

The Win Gun M9 weighs 1.2 pounds and is 8.5 inches long. This is a full-size pistol that feels quite realistic. Reloading could be smoother, as occasionally the mag likes to stick. However, the M9 is a solid package that shooters will love to wield time after time. As an added bonus, it carries an intimidation factor with it to the battlefield. Included in the box is the M9 pistol, a 15-round magazine, an adjustment tool, and a small package of BBs.

Muzzle velocity is the M9’s bread and butter, especially for the price. The pistol fires at 370-499 FPS depending on BB weight. This is exceptional power for a budget weapon and a CO2 pistol to boot. In addition, the pistol announces itself on the battlefield with its noisiness. Not only is the M9 powerful, but it’s also very gas efficient. Expect one cartridge of CO2 to last for 100-150 rounds depending on spring and BB weights. It’ll hit hard and opponents will never question if they were actually shot. Because of this, enemies will think twice before placing themselves in the line of fire once more.

As a disclaimer, this gun may be too powerful for certain fields, especially when using lighter rounds. Players have swapped springs in these instances to reduce power accordingly.

There is a fixed hop-up which cuts down on adjustability. Thankfully, this becomes less of an issue since the M9 can sling heavy rounds with ease. BBs will fly truly out to at least 100 feet without issue. Under ideal conditions, that number could increase. Top sights are accurate and players won’t be restricted to short ranges with this pistol. This long engagement distance will help keep players out of harm’s way. As a final note on performance, players should keep an eye out for minor leaks. This is not a chronic problem, however.

The Win Gun M9 is an excellent budget sidekick with exceptional power. In terms of value, players will be hard pressed to find anything that tops it. With a solid build, no glaring issues, and versatile performance, it will shine in all environments (provided it’s legal). While many low-cost options aren’t known for their service length, Win Gun’s offering is here to stay. We guarantee the price won’t be the only thing that impresses both you and your playing partners.