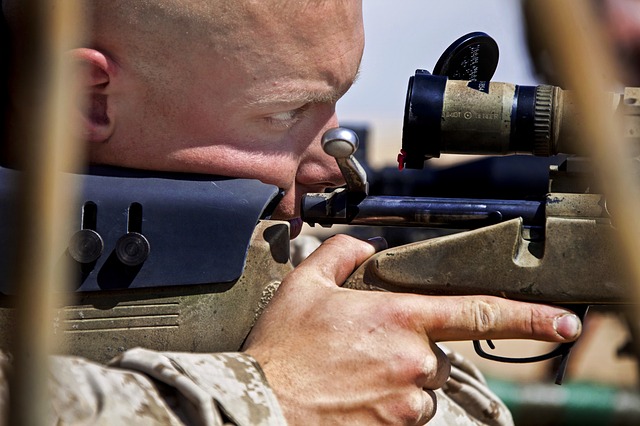 Imagine an airsoft game where you’re not allowed to use sights to aim. It’d be impossible, wouldn’t it?

You couldn’t necessarily hit your targets properly, and it would be a really horrendous game overall.

Thankfully, nobody has to play airsoft games without sights. However, choosing the right sight is another matter altogether.

There are several types of sights on the market today, and they each work a bit differently.

One of the more popular options out there is the red dot sight. It’s this piece of tech that we will be discussing today.

In this article, you will learn how a red dot sight works, what situations they are best for and how they differ from other sights. After that, we will review the best airsoft red dot sights for money.

What Is an Airsoft Red Dot Sight

A red dot sight, at its core, is a classification for a non-magnifying reflective (or reflex) sight. These sights are used for artillery and other devices that need aiming.

They give the user a point to aim at that is illuminated by a red dot. The most common design features a light-emitting diode LED, at the focus of collimating optics.

This configuration generates a dot-style reticle that remains aligned with your weapon, no matter what your eye position is.

They are considered to be quick acquisition and easy-to-use sights for everything from hunting to target practice to airsoft.

The typical configuration for a red dot sight is a tilted spherical mirror reflector with a red light-emitting diode LED at its off-axis focus.

The mirror’s coating is partially silvered, which allows it to reflect only the red spectrum. It passes through most other light.

The LEDs used are generally deep red. The reason for this is that deep red diodes are very bright, contrast well against a green screen and work amazingly with the coating since they’re near one end of the visible spectrum.

The size of the dot on your red dot sight is controlled by an aperture or hole right in front of it. This aperture is generally made of metal or coated glass.

The use of a dot as a reticle is very important. It increases the accuracy and usefulness of the sight because there’s no longer any need for other optical elements to focus light behind a reticle.

Using a dot-shaped reticle also greatly simplifies the sight, since you don’t need a fancy optical reflector to focus it as you would with more complex patterns.

They are basically a cylindrical tube which contains your sight’s optics. The advantage to this type of sight is that they allow the use of dust covers, various filters and glare-reducing shades.

Open red dot sights don’t have the tube. They are simply a flat base with a single loop of material to support the optics.

No matter which category of sight you choose, most of them have dot brightness adjustments which allows you to use a bright dot in bright conditions, and a dim one to prevent your loss of night vision.

Though the idea of attaching a reflective sight to a firearm has been around ever since the first sight was invented in 1900, true red dots weren’t invented until 1975 when a Swedish company called AIMPoint AB created the first one based on a design by engineer John Arne Ingemund Ekstrand.

The sight, called the AimPoint Electronic, had a closed-tube design and could be mounted like a telescopic sight.

In future generations, red dot sights would be created which would consume less power. These sights can run for years without being turned off.

Red Dot sights and holographic sights may seem like the thing at first glance.

After all, they are both non-magnifying rail-mounted that users look through to see an illuminated dot superimposed on a target. Both these sights assist in accurate shot placement.

The basic principle of holo sights and red dot sights is the same. An images at the focus of a curved mirror or lens will appear to be sitting at infinity in front of the user.

As we have said before, red dot sights make use of a light-emitting diode, (LED) and objective lens to etch a dot-style reticle into the viewing window.

Holo sights work much differently. They bounce laser light off reflectors to create an illuminated hologram of the reticle within the field of view.

In short, a holo lens makes a reticle 2D or 3D and projects it onto the target. Unlike a red dot sight, you can see the reticle only through the sight lens.

Though both red dot sights and holos use batteries, the power draw differs as each system uses a different light source. LEDs on a red dot sight usually use about 0.6 Milliamps of power.

Holos, on the other hand have much more powerful lasers. The lasers on holo sights can pull up to 200 Milliamps of current.

As mentioned before, red dot sights have a tubelike design, much like a classic rifle scope, including windage and elevation adjustment knobs.

Holos, on the other hand tend to have square viewing windows and shallow depth.

Because of the configuration of the mirrors inside, they tend to have a slimmer profile and don’t require the focal length of a red dot sight.

Contrary to their name, red dot sights can have a green dot instead. Also, the reticle doesn’t have to be a dot.

It can be a triangle, chevron or even a circle. Holos on the other hand have a circle around the dot-like aiming point.

There are several advantages to using a red dot sight, especially if you are first starting out in the airsoft hobby.

The diodes used in red dot sights are much less intense than those used in holographic sights. This means that they don’t pull as much battery power.

You can forget to turn off a red dot sight, and the next time you go to the field, it’ll still have enough battery to work properly. You can’t say that for a holo.

A red dot sight is very simple to use, and there are very few internal parts. This makes the red dot one of the least expensive types of sight out there.

If you are just starting out in the airsoft hobby, you need things that are inexpensive. After all, you are likely still deciding whether you like this new sport or not.

Red dots are simple to use. You don’t have to do much of anything except point the sight and look through the viewing window.

As long as you make sure that the windage and elevation are right, you will be set.

Now that you know all there possibly is to know about red dot sights, it’s time to look at some of the absolute best ones on the market.

The Sparc II, (Speed Point Aiming) is a perfectly customizable sight that is at home on whatever gun you happen to be using, from flat-top rifles to AR15’s.

It even works on whatever rail system you have. This means it can be adjusted to work with both Picatinny and Weaver rails.

Furthermore, the sight features ten intensity brightnesses, allowing you to adjust the dot intensity from a dim dot at night to a blazingly bright dot for daytime, sunny weather shooting.

The Sparc II is also extremely lightweight and durable. It is made from a single piece of machined aircraft-grade aluminum that won’t dent or warp.

Further, this sight doesn’t weigh much at all. The manufacturers know that the last thing you need is more weight on the front of your gun.

The controls on the Sparc are also rear-facing. This means you don’t have to do any of those odd maneuvers just to turn on the sight.

As far as accessories go, the Sparc can’t be beat. It comes with a spacer, a high mount and a low mount. It even comes with dust covers.

The downside to this sight, however, is that the adjustments for elevation and windage are a bit soft. This means you won’t necessarily be able to feel them click in as you make adjustments.

If you have an AR15, Vortex has a perfect red dot sight for you. The Spitfire 3X Prism scope gets its name from its lightweight prism design.

But that isn’t the only thing that’s awesome about this sight. It features the intuitive glass-etched EBR-556B reticle.

This reticle provides speed, accuracy and versatility, whenever you are shooting in close to medium range.

Etched directly onto the prism are hold-over and ranging markings from 0-500 yards to ensure you always have proper aim.

On top of all that, you can select the color of your optic, either red or green. There are five intensity levels, meaning that you won’t ever be caught in conditions your sight can’t handle.

The Spitfire comes in 3X magnification. If you have some vision problems or just need to shoot more accurately, this level of magnification can help.

Sure you could buy flip-up magnification for another sight, but this would likely unbalance your gun.

The only downside to this scope is that the eye relief isn’t as robust as it could be.

This sight is amazing. It is a micro red dot sight, meaning you can mount it on any weapon you happen to have. The reticle is chevron-shaped, and there is an on and off toggle switch for motion detection.

Battery life on this sight is fifty thousand hours, and it features an auto on/off, meaning you won’t waste energy if you forget to turn it off.

The controls are also electronic. No more messing around with wipers that can shake loose and corrode.

Though this sight is perfect for close-range battles and anything where your target is not far away, don’t expect to shoot something at five hundred yards with it, without buying a form of magnification first.

However, for what it is, it’s an amazing value. It can be dropped and banged around and will still hold its mark perfectly.

This isn’t a sight that you will have to baby just to get it to work properly. Just remember that it is not magnified and that the dot can be too small for some people to see accurately.

Having a good sight is important. Without it, you will find it incredibly hard to aim. You also want a sight that works quickly. After all, in airsoft battles targets are rarely still.

The perfect type of sight for most people, especially those new to the hobby, is a red dot. These sights are relatively inexpensive, though some are more high-end than others.

However, there are a few things all red dots have in common.

All red dot sights feature a LED and a curved mirror, and most of them look very much like traditional rifle scopes.

They can be either magnified or non magnified and they usually feature elevation and windage adjustments.

Red dot sights tend to not use quite as much power as some other types of sights, and some of them can go several thousand hours without a battery change.

This means if you forget to turn them off, as we all do at some points, you will find them still working the next time you go to the field.

A good red dot probably won’t impress any gun snobs that you’re friends with, but it will allow you to hit a target accurately, and in the end isn’t that the important part?