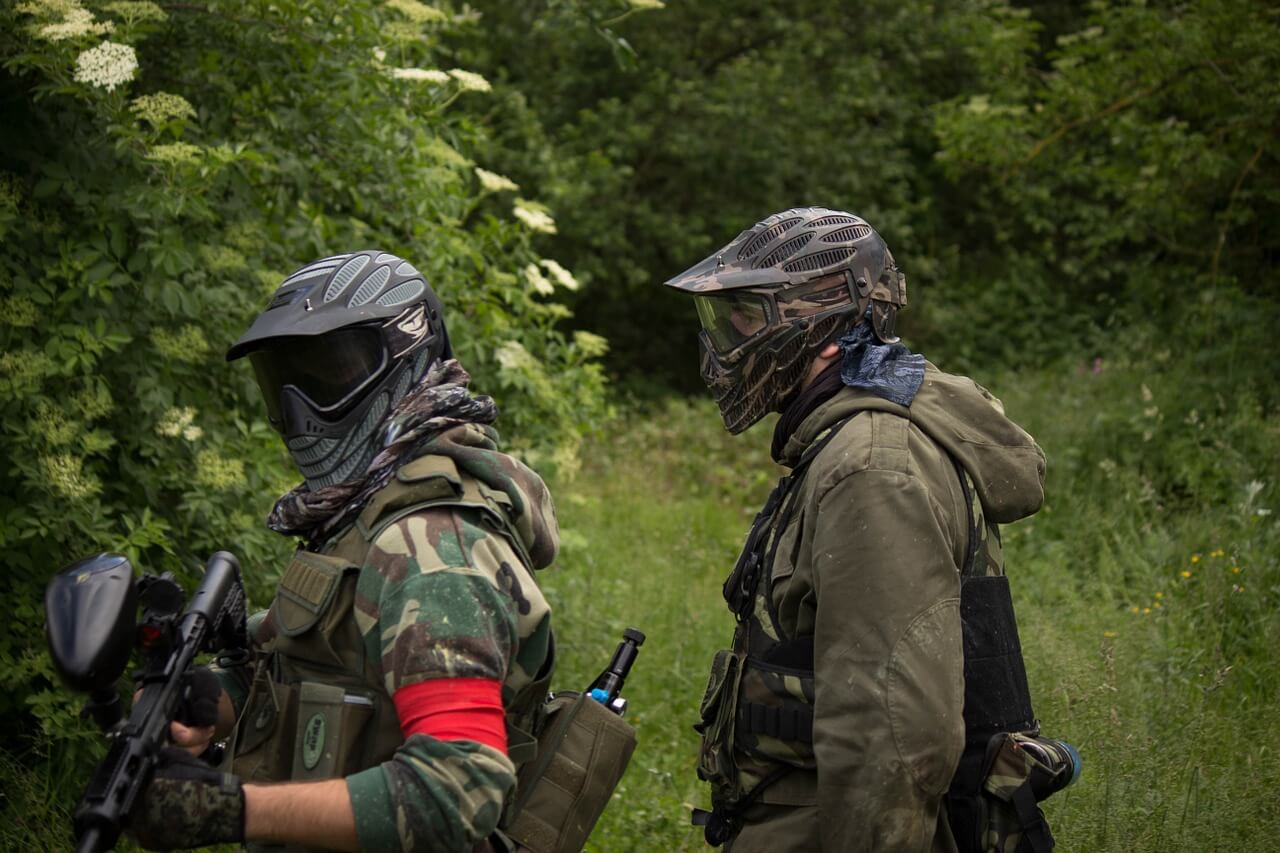 Have you ever wanted a great way to release stress? If you’re like most of us, the answer to this question is yes.

What if I told you there was a way to de-stress while making friends? Again, most of us would say yes.

So, how about a way to make friends, reduce stress AND pelt people with paint all at the same time?

If you are thinking that this is the best idea ever, then I have a game for you, woods ball. In this article, we will discuss what woodsball is, its history, how the game is played and the variations thereof, how it compares to speedball and what kind of equipment you’ll need to use.

After that, we will have a discussion of paintball markers and the article will end with reviews of the absolute best ones for woodsball.

What Is Woodsball and How do I play?

The short answer to the question “What is woodsball” is that it is another version of paintball. Most people know a little something about paintball or have seen the game played in movies or other media.

Perhaps they have even played a game of paintball themselves. However, woodsball is not the same as your classic game of paintball. It’s these differences that make the game so much more fun and challenging.

In an ordinary game of paintball, Speed and firepower are what wins the game. It doesn’t matter as much if your marker is reliable in extremes of temperature. As long as you have enough firepower, you can overwhelm the opponents with sheer might. You cannot do that in woodsball.

The typical woodsball field is outdoors, generally in a forest as the name would suggest. The field may be dotted with built-up trenches, forts, bunkers, bases or other places to hide.

For this reason, you cannot just come at it with expert firepower as there are plenty of places for your opponents to hide. Urban warfare scenarios can even be built on open terrain.

Woodsball equipment tends to favor subdued colors and be built to withstand the elements much better than your typical paintball marker.

Many players also prefer military simulation or Mil-Sim markers decked out like actual firearms. They may feature body shrouds, shoulder stocks, bipods and mock magazines. These accessories add to the authenticity of the woodsball experience.

Woodsball was created in 1981 by three men: Charles Gaines, Hayes Noel and Robert Gurnsey. Gaines was the author of a classic book about bodybuilding, Hayes was a New York stockbroker, and Gurnsey was a ski shop owner.

These unlikely friends had a passion for outdoor survival games. At some point, they had seen an advertisement for a paint gun that was used in the cattle industry and by the forestry service.

The gun had been invented in the 1950s for the forestry service as just a paint squirter for marking trees for cutting.

However, the technology did not sell as well as expected, so the manufacturer modified it, creating pellets that could be shot at cattle. The pellets would break on impact, leaving a paint mark.

Gaines and his friends gathered up some of these guns and set out to play the first-ever game of woodsball on 100 wooded acres in June of 1981.

The game was a smashing success, so the three friends popularized it, bringing the joy of this adrenaline-pumping sport to the masses.

They even created a company, Survival Game INC. This is the version of woodsball most commonly played today.

Before You Play Woodsball

Before you can play any type of Woodsball, you need to get the right equipment. Paintballs will hurt if they hit you. Invest in a safety mask rated for paintballs.

Once you have the proper mask, it’s time to get a gun. There are many varieties of gun out there. We will be discussing some of the best at the end of this article.

Now that you have your gun, it’s time to get your uniform. Ghillie suits and camouflage are both good choices.

You want something that will make you harder to see for your opponents. You can pick up some good clothing at the Army surplus store. Ghillie suits especially will make you blend in better.

If you are going to keep yourself from getting eliminated, you are going to need some good tactics. The best defense is to find a tree or other tall object to hide behind. Use your camouflage to blend in with your environment. If they can’t see you, they can’t fire on you.

If you need to move or are chasing an opponent, stalking can be your friend. Remember to walk with your legs apart to prevent your pants from rubbing together, and step as quietly as you can.

When heading out to the field, there are a few things you will need to bring.

Woodsball comes in a variety of formats. In fact, the possibilities are almost endless. However, there are a few standard types that we will go over here.

In this most traditional variation of woodsball, a flag is hung at one station on either side of the field. At the starting whistle, the teams rush forward to eliminate their opponents and steal the flag which they then bring back to their station.

This is a game of strategy. Millions of moves are possible, and there is something for everyone to do. You can be a sneaky ninja or a charger, a flag defender or an ambusher.

Strategy is of the utmost importance since you only have to get the flag if you’re on the opposing team and defend it if you’re not. You don’t have to eliminate the entire opposing team to win, either.

Another woodsball variation is called center flag. In this game, a flag is hung at the center of the field. Both teams rush to grab it and run it back to their side of the field without being eliminated.

Simple elimination is a good game if you just want to hunt the other team down. For this game, each team moves forward at the whistle to eliminate as many of the opposition as they can before the time runs out.

This requires teams to break down into smaller squads. Some squads form traps for the opponents, and others lure them in.

The final variation of woodsball we will discuss is attack and defend. In this variation, you divide into two teams, attackers and defenders.

There should be twice as many attackers as defenders. Defenders should be given an advantage such as a grove of trees, a few bunkers or a fort.

Then they are given a few minutes to dig in. After that, the attackers have a set amount of time to take their position without being eliminated.

If you have ever played speedball, some of these variations might look similar. However, these two variations of paintball have some very important differences.

Woodsball can be played most anywhere, including your backyard or any patch of woods. This makes it a much more versatile game.

Speedball, on the other hand, is played on a flat, open field. This field is often dotted with inflatable bunkers for hiding behind.

Woodsball players tend to wear camo and BDUS. Tactical vests have even been modified to allow the carrying of paintballs, CO2 cartridges, radios, canteens and other necessary equipment. They come in all sorts of camo patterns and colors.

Speedball, on the other hand, is mainly a professional sport. For that reason, speedball teams tend to have regulation uniforms and equipment.

Both woodsball and speedball require a paintball marker. However, the types of markers tend to differ between the two sports.

The markers used in speedball don’t have to withstand the elements nearly so much. They also must be lightweight and fast. For this reason, speedball guns tend to look like something a futuristic civilization would carry.

Woodsball markers may look very much like typical pistols. In fact, many manufacturers modify their guns to make it possible to use real tactical weapon parts.

That means you can add tactical scopes, rails, and barrels to your gun. This use of actual parts can change the operation of your gun, making it a far more customizable piece than a speedball gun.

Speedball games are fast-paced. Players use swift movements and communication to eliminate the other team. Teams tend to be anywhere from three to five people.

Woodsball teams are much larger. In fact, they can be almost any size. Woodsball games are also not as fast as speedball games because there are more things to hide behind, and more opponents.

There are even sometimes specific jobs on a woodsball team. For instance, snipers usually sit at a high vantage point, waiting for the perfect shot.

Now that we have discussed the finer points of woodsball, it is time to review a few of the best guns out there so that you can get the best gun for your money and own the field.

Tippmann is one of the top brands of woodsball gun, and they do not disappoint with this one. The Cronus Tactical is a milsim marker with over-molded rubber grips and a composite body.

There are three mods that complete the military look of this gun, a mock silencer, carry handle and an adjustable stock.

If modification is your thing, this gun has you covered. Simply mount any accessory onto the four picatinny rails.

If you are just getting into the world of paintball, this marker comes with everything you need! That includes a 3skull 20-OZ tank, a 3skull harness, 140rd ultimate paintball tubes, Gold Cup gun oil, Ultimate Paintball 200rd hopper, 3Skull orange squeegee and a GSV XVSN mask.

The gun is capable of firing paintballs at a rate of 280-300 FPS, which is the regulation on most paintball fields.

On the downside, this gun is not easily upgradable and to get to the internals, you have to unscrew everything. Be prepared to lose parts if you’re not really careful.

If you want to get out on the field as soon as possible, the Action Village Paintball package is perfect. They bundle the best guns with awesome accessories.

This package contains everything you will need to get started as soon as it arrives. The gun is a Kingman Spyder Victor.

Your CO2 tank, mask, a paintball play wristband, harness, gun, paintball pods in smoke, squeegee and loader are all right there at your fingertips. This is the perfect gun to get started with.

If you are already a paintball expert, this gun, though basic, will still be a good one to have around if your primary marker breaks down or if you have a friend who needs to borrow equipment for their first time playing.

Do you want to only make one organized purchase that’ll cover everything you need to get started it woodsball?

The Tippmann US Army Project Salvo Package has you covered. This bundle comes with a marker, a paintball mask with a visor, gun oil, and a harness.

Tippmann, as you probably know, is very well-known for their paintball guns. This one is no different. It’s accurate, the kit is great, and it’s very durable.

All you have to do is assemble the gun, put on your mask, and you’re good to go.

Woodsball is an amazing game. What other sport would allow you to run around shooting people with paint and hiding behind natural obstacles to keep you from getting hit? What other game could be such a great way to increase your reflexes?

Safety is important when playing though. Remember to wear safety gear and a face mask that is rated for paintball.

There are many versions of woodsball. Pick the one that suits you best, and have fun!