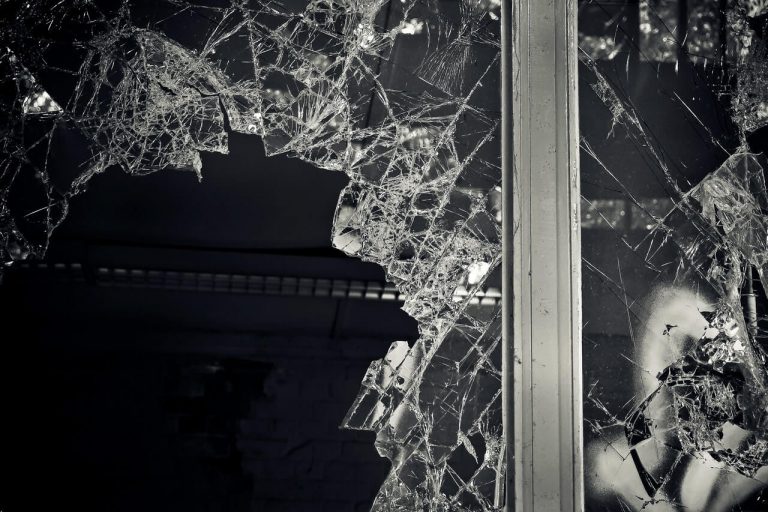 If you’ve been secretly curious to know if your AEG packs enough of a punch to shatter a couple of windows, you’ve come to the right place because you’re about to learn just how powerful your rifle is.

If you’ve ever tried it, you probably know typical airsoft replicas can’t break glass, unless you dump a whole mag on the weaker stained-glass variety. And if you want to break normal glass, you’ll probably have to be shooting some pretty heavy ordinates. If you’re using normal plastic BBs though, you can’t generate enough power to go through a window or even a kitchen glass.

How Much Force Does It Take to Break Glass?

To break 25 square inches of regular glass, you need to exceed the 6,000-psi strength limit of the glass. That means you have to generate about 15 pounds of force if you’re hurling a large object at the glass.

With smaller objects though, you only need a fraction of the force to break the glass. Suppose you fire a 6mm BB weighing 0.20 grams at the same glass pane from half a meter away. You’d generate a force equal to about 0.16 psi.

These figures tell us that it is almost impossible to break the glass using regular ol’ plastic BBs unless the glass is damaged in the first place. That’s all the math you need to prove Jimmy, your next-door neighbor blaming you for shattering his window with your airsoft rifle, wrong. Even at point-blank range, it is almost impossible to break glass with a plastic BB fired from a typical airsoft replica – ‘almost impossible’ being the operative word because there are tons of upgrades you can stick in your replica to make projectiles travel at much faster speeds.

So let’s look at how you can make an airsoft gun shoot projectiles at sufficiently high speeds to break the glass.

Make your Airsoft Replica a Window Killer (Sort of)

You can’t just upgrade any airsoft gun and expect it to break glass. Spring pistols and even AEGs upgraded to shoot BBs at 450 feet per second still won’t break glass with a single burst. But the gas operated ones -especially those used by the military in training will shatter normal glass.

Gas powered replicas are as lethal as a fully automatic gun. They are more powerful than most AEGs even if you don’t have upgrades on them. To make them even more real, you get the same recoil and blowback you’d get from firing a real gun.

And that’s only half of the fun.

With modern engineering, gas powered replicas function like the training weapons issued to the military. They fire projectiles by releasing compressed gas that forces BBs down the barrel. Typical gas operated replicas use either green gas (propane) or carbon dioxide (CO2).

But you can use special variations of CO2 canisters which pushes BBs down the barrel at insane speeds.

A regular 12-gram CO2 capsule has a pressure of about 800psi/55bar. The Red and Black gas canisters have a pressure almost double that of CO2. That means BBs fired from a gas operated airsoft replica equipped with either Red or Black gas have a much higher muzzle velocity. That can only mean one thing. The BB impact from a Red or Black gas-powered airsoft gun is much greater.

But is it sufficient to break glass, you ask?

The jury is still out on this one, but what folks agree on is, if your gas-powered replica has an FPS greater than 300 and shoots BBs over the .20-gram weight class, it will dent metal sheds. If it has a 400 FPS and you fire the same heavy projectiles, you’ll dent a car.

That means gas powered replicas that meet the above specifications will shatter some glass. They won’t crack your car’s windscreen, but they’ll probably go embed themselves in the glass. Get a high-powered, gas-operated sniper rifle squeezing out .60-gram BBs and you’ve got yourself a bonified glass breaker.

If you own one of this, Jimmy was probably right. You cracked his windows. But you didn’t break them.

But there are custom guns from Piper’s Precision Productions break windows. The Strafer, M2 HB Heavy Machine gun and the minigun are real window killers.

The Strafer is probably the world’s fastest firing airsoft gun at 150-175 BBs per second. That’s 9,000 – 10,000 rounds a minute! And it’s gas-powered meaning those angry 6mm BBs hurtling towards your neighbor’s windows are probably traveling at a maximum of 625 FPS. That’s more than enough to break a window. To make things worse, or good depending on which side of the fence you stand, the gun comes with a DB Customs Tighbore barrel giving it a ridiculous range of 75 yards without losing its accuracy.

The M2 HB Heavy Machine gun is no child’s play either. It is modeled after the classic World War II Browning M2 HB .50 caliber machine gun and it does its absolute best to imitate its devastating power. Weighing in at 61 pounds, it is not exactly the lightest and most maneuverable gun on the field, but once you’re sending 100-600 6mm or 8mm BBs downrange at 500 FPS, who cares about maneuverability. You’re the king of the hill. The cyclic firing rate of this gas operated monster makes it a devastating opponent for other teams and all the glass in the world. But you’ll have to shell more than $2,000 to get one.

If you’ve watched Terminator 2 or Iron Man 2, there’s no forgetting those scenes with the minigun.

That metal monstrosity with six spinning barrels mows down everything in its path. And you can bring one to an airsoft field if you have a couple of thousand dollars to spare. Piper’s Precision minigun bears all the hallmarks of the real deal including a ridiculous rate of fire of 3,000 rounds a minute and a muzzle velocity of 500 FPS, you’ll probably want to point this thing away from anything that looks remotely like glass. The 30-pound gorilla features mostly in high-end production Milsim events where it can either be mounted on vehicles, helicopters, or carried to the battlefield by the direct descendants of Vikings.

It is the single most scary thing you’ll ever meet on the field. When it locks its sights on you, you better duck for cover.

Are There Window Breaking BBs?

Now that we’ve covered guns that will break glass, you might be wondering if there are special BBs hard enough to cut through glass. The sad news (is it really sad?) is, if you’re using standard plastic or bio-degradable BBs, you won’t be breaking glass. You’ll come across stories of BBs breaking the red dot sight and scope lenses during a skirmish, they’ll have to be hit by a BB traveling at more than 280 FPS. And in most cases, the glass only shatters and does not break completely. Heavier BBs like the .30g variants might do a lot more damage to red dot sights or scope lenses, but the jury is still out on that one.

You’ve seen that it is extremely hard to break glass with typical airsoft guns. If you want to shatter glass, you’ll need to make some serious mods on your replica or get one of Piper’s Precision monsters. Either way, having an airsoft gun capable of shattering glass might be against the rules of your local airsoft charter. You might want to check with them if they allow them on the field, especially since they can shatter protective eyewear.

If you own an airsoft gun, you’re probably safe using it in your backyard for practice, so long as you’re not aiming at someone’s eyeball. Those are a whole lot more delicate than glass. You won’t have to put up the cost of repairing your neighbor’s patio door every time you step in your backyard for a quick practice session. But if you’re using a modified gas-powered replica, you might want to point that thing away from glass. As much as it won’t break it, it can damage the glass or even knock it over causing it to shatter.

To wrap things up, airsoft guns are designed to be as safe as possible. The FPS and rate of fire rating on airsoft guns are sufficiently low to prevent damage to property and life. You do get the occasional shattered scope lens after a barrage of BBs hit it, but other than that, you won’t be shattering windows and patio doors. Really powerful airsoft weapons capable of dealing this kind of damage are not only expensive, but they’re unwieldy. When you mount that M2 HB machine gun weighing in at 61 pounds, chances are that you won’t be doing a lot of moving without the help of your teammates. That means the enemy can easily flank you and take you out of the game much earlier. It’s better to carry more maneuverable guns. Trading off firepower for maneuverability works almost every time, even in real combat.