A Breakdown of Cyma Airsoft AK47s

A Breakdown of the Cyma AK-47 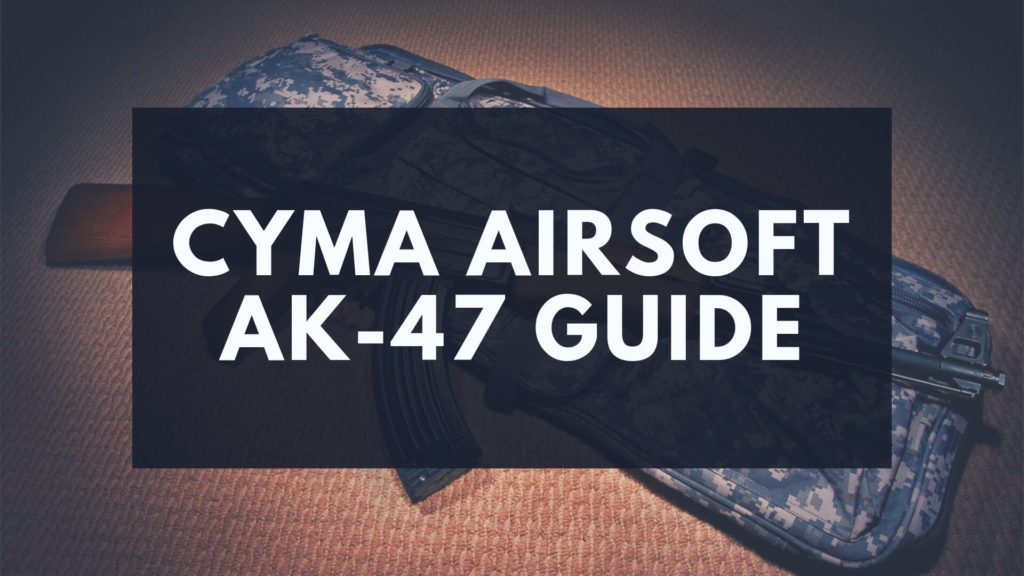 Cyma’s are one of the more well-known airsoft brands today, due to their ability to provide airsoft guns at a relatively lower price. Sure the quality isn’t going to be the best ever, but you can find some solid entry-level airsoft guns by them. This guide will look at their AK-47s and AK-74s so that you can see what each Cyma model has to offer in terms of quality and performance.

The CM-028 is Cyma’s version of an airsoft AK47. Its ease of use and affordability makes it a solid choice for beginners looking to jump into the game of airsoft for the first time. This AEG rifle weighs about 6 lbs. and is roughly 33 inches long, with the inner barrel accounting for about 18 of those inches. The build is made from plastic, which is understandable given the price. The provided magazine has a capacity of  600 rounds, and the magazine has a little bit of a wiggle to it. The rifle has both semi-automatic and automatic firing capabilities, with the selector switch being located on the right side of the rifle. On the upside, the plastic gives the rifle a lighter weight for easy maneuverability. The gearbox is a metal Version 3, which is easy to upgrade and is solid given the price. The butt plate isn’t a screw-on, which makes inserting and removing the battery fairly easy.  The rifle has your standard two sights, front & rear, with the rear sight being adjustable.

The muzzle velocity of the CM-028 is around 350 to 400 FPS, which is about what you’d normally see for most AEGs. In terms of range, you should be able to hit targets from about 200 feet away with little issue. The rifle is pretty accurate, although the sights are underwhelming. This isn’t too much of a surprise as many airsoft AK models have lackluster sights. Something annoying I found was that extended use of the rifle will loosen the bolt of the switch. If you don’t switch between semi-automatic and automatic often, you should be fine.

Although the CM-028 is budget-friendly, you can find other Cyma models with better performance out of the box, like the Cyma 045 (The caveat is that it’s actually an AK74U). However, if you’re adamant about getting an AK47 and want something cheap, the CM-028 is a viable option.

The CM-031 is an AK74M airsoft AEG rifle that’s been around since 2011. It weighs about 8lbs and a length of 37 inches. This rifle, like most of the other ones on this list, has semi-automatic and automatic capabilities and comes with a stock magazine that has a capacity of about 600 rds. Most AK Series Airsoft AEG magazines should work on this rifle, which is great because the stock magazine might be too wiggly for some people. The rifle has two sling mounts located on the front and back of the rifle, although the sling mount on the back of the rifle is a bit flimsy.  The rifle has your standard two sights, with the rear sight being adjustable.  Cyma recommends using a 9.6V small brick Type battery, which unfortunately isn’t included in the package. The CM-031 also has a folding stock, which can be beneficial in CQB skirmishes.

The CM 045 is a sub-$200 AKS-74U rifle with a weight of about 7 lbs. and a length of about 29 inches. It comes with a plastic handguard, plastic grip, and a plastic magazine that holds around 600 rounds. The externals are great as it’s made from metal, although keep in mind it’ll feel heavier than rifles like the CM-028. The plus side to the metal externals is that this AEG rifle can take a beating. There’s a button on the back side of the CM-045 that allows you to fold the stock, which will click on to the left side of the rifle. Foldable stocks can be a bit wobbly, so make sure you take that into account. There’s a sling mount on the back of the rifle, which can actually be a bit annoying if you’re trying to move quietly on an airsoft field, but if you tape it down you should be ok. It also has a top cover that makes it easy to insert batteries, with the caveat being you can’t open it if you have an optic rail mounted to the rifle. The fuse in the gun is a little big and can get in the way, but it’s a minor issue. Make sure you’re getting yourself a smart charger to prevent yourself from overcharging the 8.4V battery and to make sure the battery lasts as long as possible. Overall, this is a great beginner airsoft rifle that performs well out of the box and that won’t break the bank.

The CM-048 is an airsoft AK-74 rifle that weighs 6 lbs. and has a length of about 35 inches. This rifle uses real wood for the stock and handguard, giving it a nice aesthetic look. Some people have complained that it’s too shiny, so if that’s the case you can sand it down.  Something you probably already noticed is that this rifle is very similar to the CM-045 in terms of their internals. However, unlike the CM-045 you can remove the top cover while having your optic rail still on the gun, making it more convenient. The butt-plate is a screw-on so you won’t have to worry about the battery falling out or the butt-plate falling off. The stock is fixed as well, so you shouldn’t have any problems with a wobbly stock. The bolt is different from other brand is a little single guide rod that’s easy to pull. You won’t have to deal with a large bolt going back and forth, saving a bit of space for rewiring purposes. On the left side of the gun is a scope rail mount for accessories, and there’s a removable jamming rod on the front of the gun. In terms of performance, you’ll find that this rifle has a muzzle velocity of about 400 FPS and will be accurate up to about 180 ft. away. This is a very solid airsoft AK rifle by Cyma, and probably one of the best Cyma models on the market.