Is Airsoft Dying? What We Learned from 200 People 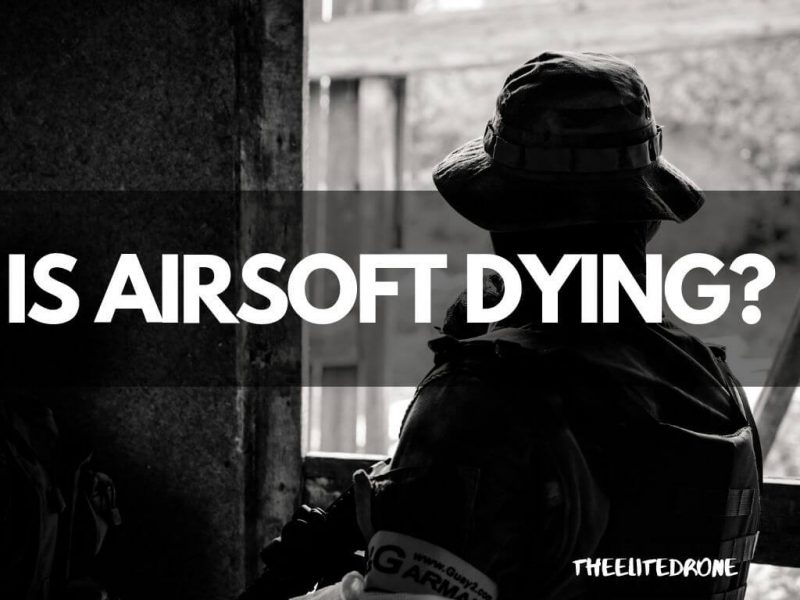 Is Airsoft Dying? What We Learned from 200 People

“Is airsoft dying?” This question seems to pop up from time to time, and people in the airsoft community are pretty tired of hearing it.

And I get it. Who wants to hear people tell them their favorite hobby is “dying”? I know I wouldn’t.

That’s why I made it my mission to answer to this question. Here are the results of my research.

What We Saw Using Google Trends

I began my research with Google Trends. For those of you that don’t know, Google Trends is a tool built by Google to look at how topics trend over time. I wanted to look at the term “airsoft” to see how it was trending over time.

From 2004 to Present Day, here’s what the graph showed for the United States: 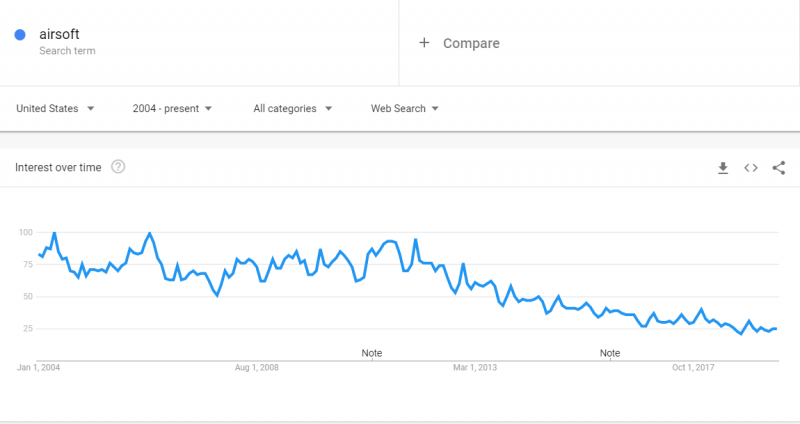 Whoa…not good. We see that around 2012 the graph begins its downward trajectory.

So, that must mean airsoft is dying….right?

In my guide on what is airsoft, I talked about the history of airsoft and how it spread from Japan to the rest of the world. Airsoft didn’t reach the United States until about the 1990s, and even then it didn’t gain traction until the early 2000s. The early 2000s were when new airsoft companies appeared, and they began flooding the market with airsoft guns.

But what does this have to do with airsoft trending downwards?

When airsoft was introduced to the US many people still did not know what it was, although people began hearing about it.

What do you do when you aren’t sure about what something is? You search for it on Google. That’s why I believe we saw such a strong performance for airsoft in the early 2000s.

Over time people became more familiar with the sport, and didn’t need to search “airsoft” anymore to figure out what it was. That’s why I think we see it begin trending downwards. I call this the “Familiarity Effect”.

To see if my theory held up, I decided to look at the trend for “paintball”. 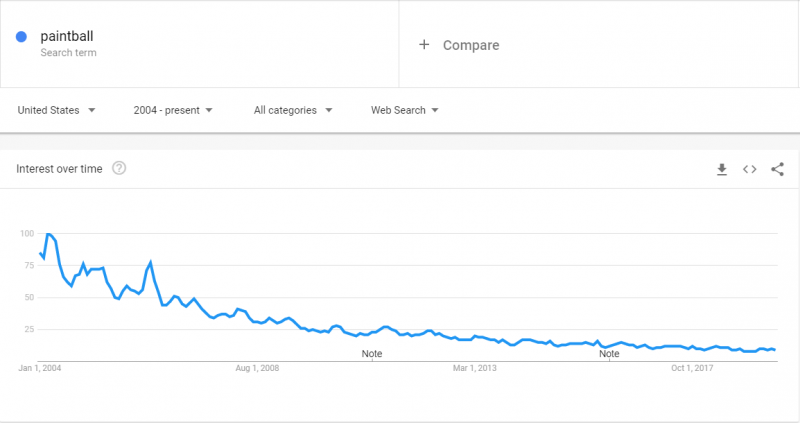 We see a similar trend here as well. I want to clarify that I don’t think the Familiarity Effect is the only reason we see a downward trend, but I do think it’s a contributing factor.

I then decided to search “airsoft near me” in Google trends. My thought was that people who searched this would know what airsoft was, and therefore wouldn’t be affected by the “Familiarity Effect”. If airsoft were in fact dying, we should theoretically see this trend downwards too. 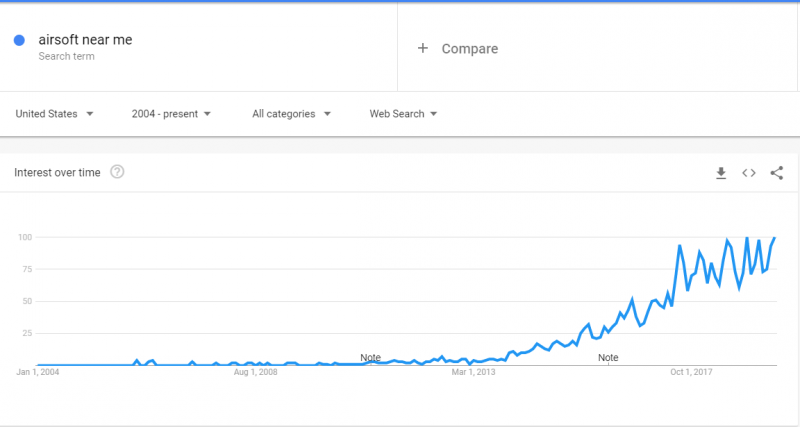 Well…shit. We see that people searching “airsoft near me” is actually trending upwards each year. A completely opposite trend from what we saw with “airsoft”.

Although this was nice to see, I still wanted to get some more data.

Survey #1: We asked 104 People About Airsoft

To dig up some more data, I set up a survey that I sent to 104 random people living in the UK and the US, and I asked them a simple question: Would you consider playing airsoft?

I asked this question with the idea that if airsoft were in fact dying, there shouldn’t be many people interested in playing at all.

After looking at the results of the survey, I discovered I was wayyyyy off. I was shocked to see that 76% said they would consider playing airsoft …that’s 79 people! It was pretty cool to see that many people being interested in the sport.

Here is the breakdown of the people that took the survey: 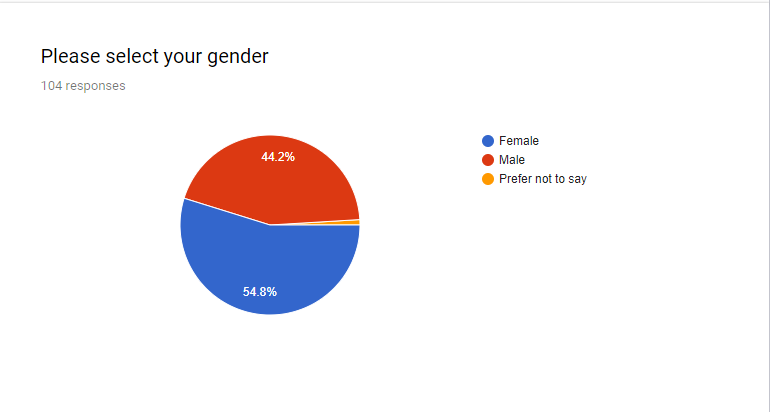 55% of the people that took the survey were female, and 44% of people were male. 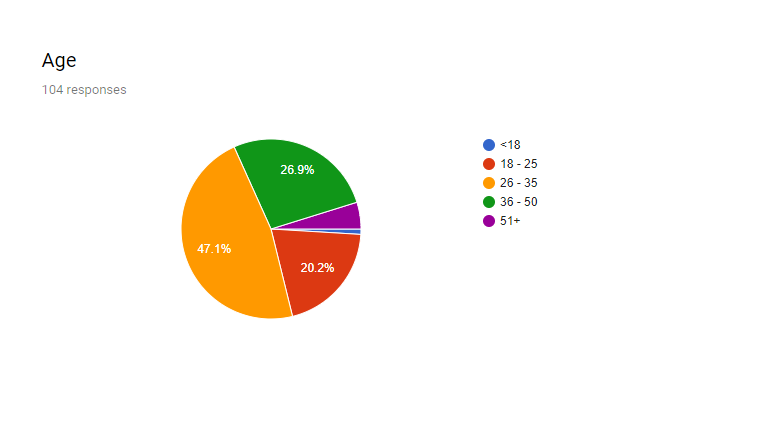 The bulk of the people who took the survey were between 26-35 years old.

Here were the final results.

I also had a follow up question in that same survey that asked why they would or would not consider playing. Here were some of the more interesting answers:

Survey #2: Why Won’t You Play Airsoft?

What was interesting was that 4 of the 5 reasons could be easily addressed.

If we want more people to play airsoft, we need to

I don’t believe the sport is dying, but I do believe more can be done to grow its popularity.

I hope my research helped shed some light on the future of airsoft, and I would love to hear your thoughts in the comments below.