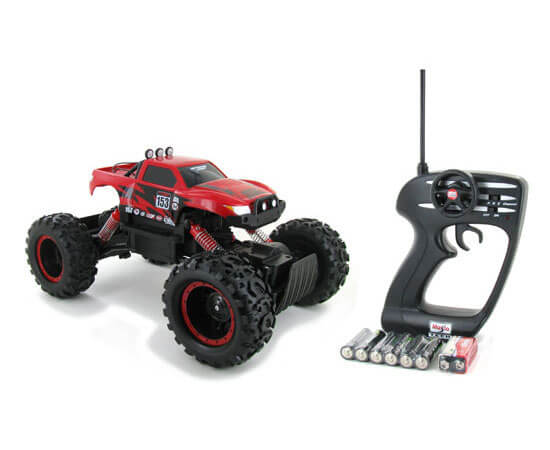 We’ve all probably, at one time or another, owned an RC vehicle which could go off road. In fact, most of us probably own one at this very moment. So what makes the Maisto Rock Crawler stand out from the crowd? Many RC vehicles can deal with tough terrain, blasting over rocks and the like.

However, there aren’t many toy grade RC vehicles we could think of that do what the Rock Crawler can do. The Maisto Rock crawler can handle all the types of tough terrain, and can also quite literally climb rocks.

The company that makes this vehicle, Maisto, was founded in 1967. They started making model cars in 1978, and their line of Maisto Tech RC vehicles have been on the market since 2008.  They definitely have a lot of experience behind them. So we set out to put the Maisto Rock Crawler through its paces. Will it live up to its product claims? Stay tuned to find out with this Maisto Rock Crawler review.

What is the Maisto Rock Crawler?

The Maisto Rock Crawler is a toy-grade RC vehicle designed for rough terrain. It can bound over gravel and through dirt. It isn’t waterproof, so don’t drive this one in snow or mud. However, it can climb over large rocks, much like a goat. The TPE tires make sure that the truck has contact with the rough terrain at all times so there’s less skidding and you retain ultimate control.

What’s in the Box

Check out the video below to see the Maisto rock crawler in action!

The Maisto packaging is just as secure as a hobby-grade RC’s packaging would be. Everything is wedged into a Styrofoam package within the main box, so it doesn’t jiggle or bounce around at all. The outside of the box features a graphic of the Rock Crawler in action that frankly looks entirely awesome.

Opening the box is a total breeze, though getting things out of the Styrofoam can be difficult as everything, and we do mean everything, is held in with annoying twist ties. To open the box, simply snip the tape on one flap, slide the Styrofoam package out, and set about undoing that fleet of twist ties.

The Maisto Rock Crawler comes in a variety of colors. This means that it is possible to choose your favorite. Seeing as it is a toy-grade RC, it is made of plastic. However, this does not stop it from being a quality RC vehicle. The suspension is awesome, the tires aren’t overly hard, and the shocks actually have metal rods inside, which isn’t a normal thing for toy-grade RC cars.

This truck measures 12.5 inches long and weighs 2.2 pounds. For the kid in all of us, this truck comes standard with some really eye-catching graphics as well as the color of your choice and looks like it’d run like a dream. Does it? We’ll soon find out.

How Does It Drive?

The rock crawler may not be the fastest RC vehicle. However, that is not the goal. The goal, of course is torque. If you have ever seen an actual rock crawler, you will know that the object is the climb. This rock crawler can climb over rocks that are as tall as it is which means that the rocks can be about seven inches tall. Furthermore, it can climb over higher ones, depending on the approach.

In most RC cars, the suspension is just there for looks. Not with this one. This truck features fully articulated suspension and shocks that actually work. This means that your truck will not be bouncing everywhere.

The only faults we could find with driving this truck were that the steering can be a bit dodgy at times and the range between remote and truck could be a bit longer and allow for a better drive distance.

This truck takes a LOT of batteries. Firstly, it takes two AAA for the pistol-grip-style remote and six AA batteries for the truck itself. None of these batteries are included, so you will be out a little bit of money if you aren’t one of these people who keeps the family packs of batteries in all the common sizes lying around the house.

The Maisto Rock Crawler features both front and rear articulated suspension. This makes it great for climbing. Most of the time the suspension in toy grade RC cars is not great. That is not the case with this one. You can pick up one wheel at least three inches before another wheel comes up.

This RC truck features not one motor but three. Two of the motors are used for driving and provide the power to master all that rocky terrain your truck will be crawling over. The third motor is used for steering. This means that you won’t lose control of your truck’s steering during a steep climb as there is a dedicated motor for it. This little truck is so torquey that it is hard to believe it operates on six AA batteries. For as much torque as you get, you’d expect a much more powerful set of batteries inside.

That ends our Maisto Rock Crawler review. This is a good deal for the price, and amazing when you consider that it is a toy grade RC vehicle. For a toy, the manufacturers took great care to make it amazingly fun to drive. This would make an excellent truck to test your child’s interest in the hobby.

There were only a few flaws to mention, and none of them is a deal breaker. The truck does require six AA batteries, and the remote requires two AAA batteries. Further, the range between truck and transmitter could have been a little longer and occasionally the steering was dodgy but that didn’t happen often. If you are looking for a racer or trophy car, this isn’t the vehicle for you. However, if you are just looking for a cheap, good car that’ll go off road and climb over rocks, this one’s perfect.